Why is my ATSC Tuner not picking up the names and virtual channel numbers? 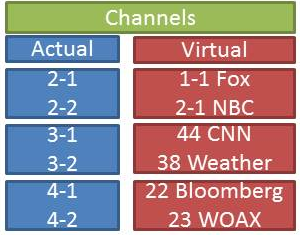 When an HD tuner scans the channels, it looks at each channel it finds, extracting the data file that provides the channel name an its virtual channel ID, and other information. A digital channel carries an MPEG2 stream that may contain 2 or more programs. The data tells the tuner how to find the video and audio associated with a given channel ID for each program. As a result, a digital channel the tuner finds on physical channel 2 may contain two programs, one called 1.1 and the second called 2.1. This is called the Virtual Channel ID - this is the channel the TV shows, and may also include a name, such as Fox or NBC.

When the CVCT is correct, all TVs show the right channel listing. When it's not, each make of TV has its own logic in creating as list on its own. So the list shown on one TV may not be the same as other TVs. This isn't a quality issue, it reflects the programming solution chosen to show the channels when the data is missing

In this case, the only solution is to fix the problem at the origination point. If the site is using digital modulators, check and see if the CVCT table is turned on. In cable systems, usually one using the ATX Ucrypt technology to deliver clear QAM channels at a site, the provider needs to come in and fix the issue so all TVs show the same list.