From time to time, our CR Support staff hears that our QMOD Update app will not update their QMOD or QIP encoder over USB and/or Ethernet. In most cases, the solution rests in Firewall settings and which Network Adapter is selected in the installer app. In a few cases, Windows may not have the RNDIS driver for the USB port installed.

The most common fix is to set Windows Firewall (or whatever Firewall app you use) to pass the QMOD Update app data. That seems obvious for Ethernet updates, but more subtle for USB. When you connect via USB, you're actually making an Ethernet connection with the QMOD, so that's related to Firewall as well.

Windows Firewall never prompts you to accept or deny the connection, so you must do this yourself. Search for Windows Firewall, and look for the option to allow apps to communicate through the firewall. Go to QMOD Update and check both Private and Public option. Your Win OS may have 4 columns, check those too. The selection will appear if you've tried to run the app at least once. 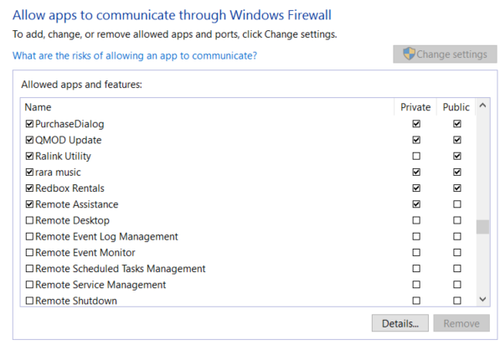 Grab the right side of the installer and expand to the right to monitor the installation process. The first thing to to check is if the app chose the right network adapter. On my laptop, my Ethernet is wired to my DisplayLink docking station, but there are many other network adapters, including the port on my laptop and the WiFi interface. Make sure the app has selected the correct port.

One the right, you'll see the URL of your PC that is sending the data. You can watch the install process as it progresses. If it seems to stop before it completes, you can now tell Support what's going on.

The left message box gives you a summary of what's been installed. If somehow the first attempt only installed a few program elements, it will install the rest at this time.

The front-panel USB port acts as an IP connection, using an RNDIS driver. Normally, Windows updates itself when it connects to the RNDIS format USB connection. If you get a Driver Not Found error, first make sure you are connected to the Internet so the driver can download and install. Go to Devices and Printers and look for a USB Ethernet/RNDIS Gadget icon - if it's not there or says Unknown Device, you need to add the driver.