Display Express is a very easy system to install and integrate, compared to other video distribution and control systems. Though it's really simple, it's often a new way of doing things for integrators. In this blog, we'll lay out the basic steps, covering topics we see arising from those new to the technology. If you get the basic steps right, you'll save a lot of time and effort caused by redoing the install correctly later on.

Install the ICE-HE-DXL Display Control Center first, as the unit sends a “Heartbeat” command over the RF network. If the RF data channel is correctly installed, all TV controllers have NET LED that will flash once a second. When you see the system “heartbeat” on the controller, you know it will respond correctly. Never use the RF In input-that's reserved for a legacy educational media system.

We advise using the RS-232 or USB port whenever the PC that sends the control commands is in the same rack. It often takes some time for the IT team to reserve a static IP address. If you are using IP from a Windows server or remote custom control such as AMX, Crestron and others, the local RS-232 is handy for testing when the system is being installed.

The Ethernet port requires a static IP address. The control protocol is identical for both RS-232, USB, and TCP. Commands are buffered, so you could use both ports at the same time. To define the IP port when connected to a DHCP network:

In the next step, you’ll need to set up the device number for the ICC1-232 or ICC-IRX. Turn the enclosure so that the DIP switches are on the bottom as shown.

Geek Note: if you turn the enclosure around so the switches are at the top, you'll see that Switch 1 is now a binary expression where the first switch =128 and the last =1. Might be easier to use that way if you're more comfortable with binary numbers.

Most dealers will pre-configure the controller’s address before hanging displays - and some do this at the site. Either way, you need to plan the addresses and names you want to assign to each controller You can download a TV Installation spreadsheet here - Display Express TV Worksheet .

All TV Controllers will be shipped with the TV code set marked on a label so you can match the controller to the right TV. We repeat the instructions for the device address on that label – and there is space for you to add the TV address and location. They are shipped with a default number for testing, which you’ll change in the field.

ICC1-IR controllers have the full library of IR codes onboard. It will be set for the code you specified, but you can send a command to select a different code. ICC1-232 controllers have one code set installed. You can update or change the code later by updating the controller firmware. 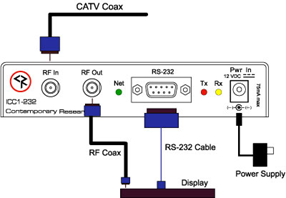 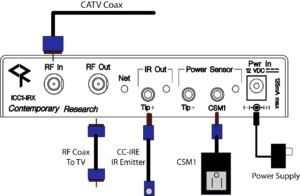 You will set the address of the tuner via menus rather than switches, but the idea is the same. One menu sets the unit address from 1-99, and the next menu sets the Zone # from 1-15 (multiply the Zone # by 256). There is also a special mode that can define the complete address from an IR remote. Refer to the product manual for instructions.

The ICC1-TC Tuner/Controller, replaces the ICC2-ATSC 4S, and boasts amazing adaptability with incredible features that allow users to get the most out of this compact tuner/controller