Venue Vizion: Easy to Use

The bar for entertainment has never been higher. Audiences across the world have nearly unlimited access to movies, music, and other forms of digital content, all directly from their phones. So how can a venue still draw and captivate live audiences night after night? 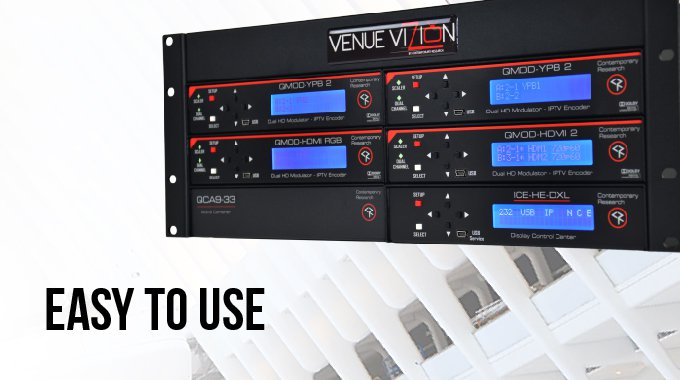 Free software tools that allow users to maintain, monitor, and update many of their CR products.

Contemporary Research offers a variety of product accessories to necessitate or enhance the functionality of AV products.

Venue Vizion’s Display Control Center hosts easy-to-use Web pages for control and sends commands over the same RF coax as the digital channels.  With the included TV Controllers, multiple TVs and video walls can be commanded with the touch of a button


Four QMOD HDTV Modulators-IPTV Encoders convert up to eight sources to digital channels.
RF outputs from the QMODs connect to the QCP-8 Passive Combiner to make one RF feed.
Choose from the following QMOD models:

Additional QMODs can be added at any time.

One mounted at each TV, providing RS-232 or IR control Controller receives commands sent over RF for TV power, channel, inputs, and volume.

Additional TV Controllers can be added at any time.