Coach Experience is First-Class
Talk about riding in style! Well, Actually riding... and living in style, as owners of Liberty Coach vehicles have all the comforts of their own high-tech homes-or in some cases, more so- at their fingertips. The company was formed by Frank and Jeanne Konigseder in their suburban Chicago backyard in 1968 as they turned a Greyhound into their dream coach, and current vice president and owner Frank Konigseder Jr. now carries forth a similar mission for today's Liberty Coach buyers, paying particular attention to technology as a lifestyle benefit and differentiator; it doesn't hurt that Konigseder Jr. has a mechanical and electrical engineering background. "Around 2001 I brought Crestron basically into our industry, and became a programmer as well," he says. "As technology kept evolving we added equipment to the coaches." 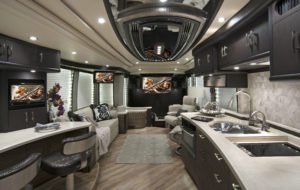 Six-figure A/V Installation Impresses
Liberty Coach builds 14 coaches per year, with vehicles 45 feet long and costing 2.2 million to 2.6 million - with around $100K of control and A/V included. Liberty does its own integration, which includes Marantz/KEF 5.1-channel systems in the living room, bedroom and entertainment bay. Samsung displays include a 22-inch model, 48-inch curved set, 55-inch 4K unit and 65-inch 4K set with attached KEF soundbar. Alsong with Blu-ray, Apple TV and DirecTV sources, a critical component fed through the WyreStorm HDBaseT matrix is the pair of Contemporary Research (CR) tuners. Because coaches travel so much the CR tuners have not only filled an important off-air and local cable viewing solutions previously handled via VCRs, but significantly reduced the amount of wiring, streamlining to the WyreStorm unit instead of multiple coax(competitors often route wire from TV's individual to rooftop antennas, and Konigseder appreciated the less copper used by the CR install). 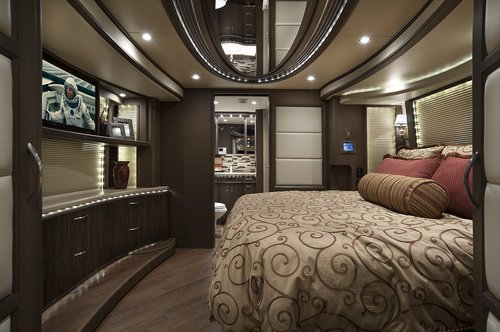 Control Interface Yields Total Command
The A/V sources are controllable through the Crestron system and the Crestron Mobile Pro app gives owners convenient command. Liberty installs three iPad interfaces (one primarily for dashboard/cockpit functionality), which also allows owners to view battery management, standby power systems, freshwater and holding tank capacities, temperature, surveillance camera system and more. The company will do upgrades of existing vehicles, which Konigseder says can last 3 million miles. "One of the things Liberty brings to the table is we are owners and users of the product, and our customer base finds our programming and graphic interface more intuitive than what they get at home sometimes," he says. "Our customers have come to expect us to take[technology] to another level."

Printed in the December Issue of CE Pro.
Written by Arlene Schweiger