You could label it an emergency of sorts. The Riverside County CA AEOC (Alternate Emergency Operations Center), located in the city of Indio, CA, was tucked away in the basement of a county administration building and was outdated. At best, its ability to function adequately in case of a real emergency was questionable. The county had approved a budget of about $1 million for a new facility with the latest AV technology. That idea was jettisoned several months into the planning when the funding was eviscerated by other departments, said John Bilar, vice president of technology and stakeholders advocate/design consultant, Spectrum ITC Group. Bilar previously had worked closely with Carl Johnson, vice president, HOK, on a multiyear project for the City of Los Angeles EOC and was introduced by Johnson to the Riverside project. After its budget was reduced by nearly half, the team of HOK architects, Holt Architects, and Spectrum devised a fresh, collaborative plan to retain the proposed infrastructure within Riverside’s lowered budget. The result is an adaptive reuse of an abandoned county building featuring a modern AEOC with technology to support required mission readiness. Architecturally, the roof of the old building was raised, and the floor slab lowered. 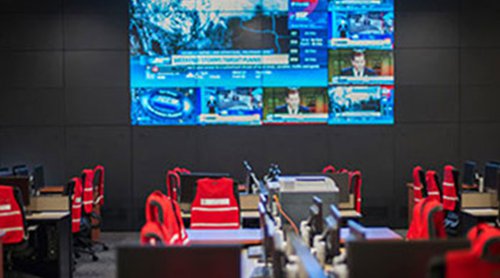 Bilar’s idea was to provide specs that would both accommodate a workable system and plan for expansion. “The AV system is designed specifically for phased implementation,” he said. “To date, they have spent about $625,000, and they have a package that serves as a foundation for the future. It’s a baseline system with one-third of the originally specified flat panels in place, but the cabling for the full system is ‘tagged and bagged,’ rolled up, tested, and verified, underneath the floors. My design decisions were informed by my previous successful experience with similar facilities, both as a design/builder for 20 years and as a design consultant/stakeholder’s advocate since 2006.” The AEOC AV system was installed by ENKO Systems, San Bernadino, CA. “The contractor did an outstanding job of following my design guidance and drawings and delivering a functioning AEOC to the stakeholders,” he said. “I developed a design package that provided Riverside County stakeholders with both a complete, ‘full/future’ facility-wide AV system design and the substantially reduced baseline AV system design with a minimized suite of services.” The current installed system features 10 Contemporary Research QMOD encoder/modulators and 10 HD tuners to distribute critical news and information throughout the EOC. “I’ve used CR’s digital tuners, encoders, and various modulator products for most of my career,” Bilar said. “I really like their solid, made-in-the-USA products that just work and work and work, as well as the accessibility to their technical team—good guys who stand behind their products.” 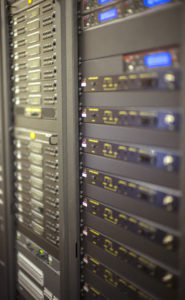 Crestron equipment was specified for digital video source selection and facility-wide signal distribution. Additionally, Crestron is utilized for the primary and secondary “hot spare” control system processors, which are located adjacent to each other in the AV equipment room cabinets. “The AEOC users interact with the control system via a primary control touchpanel in the EOC and a secondary control touchpanel mounted in the AV equipment room cabinets,” Bilar said. “I’ve relied on Crestron for over 30 years; their products and support have never disappointed me and have played a significant role in my success.” Other gear includes JBL ceiling speakers, Extron’s audio matrix, Middle Atlantic’s seismic-rated line of AV equipment cabinets, and NEC’s 24/7-rated flat panels. Nearly all of Spectrum’s projects are in the government sphere. “The typical control room, dispatch facility or command/control spaces are always working, 24/7, meaning that the operators always know what’s going on and whether the systems are operating,” Bilar said. By contrast, he noted, EOCs such as the one for Riverside are incident-driven, dark until they have to go to 100-percent operational for an unknown period. “So a facility that is normally off has to work perfectly in an instant for 24/7, escalating in operation depending on the criticality of the tasks.” “What I’m seeking are those projects that are unique, large, and multi-year,” Bilar said. “The technology in these old 1950s-to-1970s bunkers is ripe for refresh, and the need to respond to threats such as weather, natural disasters, or public unrest is constantly growing.” Challenges in these projects differ from those in the private sector. “In the corporate market, for example, the decision-makers generally decide ‘now,’ ” he said. “Working in the government realm is a marathon, not a sprint. You have to be ready to have calm assurance and a steady hand to navigate through two to four years for a project.” It’s crucial, Bilar explained, to maintain access to the information and decisions from the stakeholders and involved agencies, and it is essential to be able to recommend current equipment models as the months go by, since there will be updates because of the long timeframe. “There will be a lot of that,” he advised, “and you need to make sure the design intent and performance will remain the same with any new equipment you’re recommending. And remember: government clients love to hold huge meetings.”

Written by Karen Mitchell, Published on May 31st SCN Editor Lindsey M. Adler Karen Mitchell is a freelance writer based in Boulder, CO.

Get the PDF version