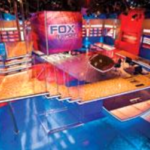 Creating the 36-by-48-foot Studio H on the 12th floor of the Fox News building in midtown Manhattan began with the build-out of a new two-story studio shell, complete with video cabling and a powered lighting grid. As executives fielded design ideas and bids, the race began: Deadlines were tight because Studio H was to be Fox's home base for live broadcasts on Election Night 2008.

McCann Systems of Edison, N.J., and set designer/partner Clickspring Design of New York emerged as the winners in the bid process. The duo had also built the studio for the new Fox Business Network (see "That's a Wrap,"). In this case, the team's design was based on a bold concept that combined cutting-edge AV with modern design. The focal point of their set creation is a four-sided, rear-projection cube meant to invoke and accentuate the spinning Fox News logo.

"We had created a smaller rear-projection cube for another install, but we knew it could be done in a larger format," says Jonathan Shor, CTS, director of technology for McCann Systems.

The cube also serves to emphasize interactivity between a news anchor or correspondent and the images and video content on-screen. The four sides of a cube, plus the ability to project anything onto it, means a versatile news environment that can cover any event.

The cube is composed of four Stewart Filmscreen 100 projection screens, each measuring 12x12 feet. The flexible screens were chosen over rigid screens due to the large size of the cube and the need to easily transport the screens into an existing space. Showman Fabricators of Long Island City, N.Y., coordinated with Stewart Filmscreen and McCann to create a custom frame to hold each screen, with each corner of the cube housing a strip of proprietary Showman LED lights. The bottom of the cube holds a solid LED light box about 6 inches deep that reflects off the mirrored floor and gives the cube a bolder look. The overall effect of combining the screens with LED lighting sets the tone for the other AV elements in the studio.

The Fox News building has a fiber-optic backbone already in place and Studio H has been able to tap into the infrastructure for fiber runs from the video processors (Vista Systems Spyder 380 8-input expansion processors and a 308 8-output expansion processors) located in the basement, to the projectors on the 12th floor. Four Thinklogical DVI over fiber extenders were used to extend the DVI-D signal.

"Using the Vista Spyders, it is easy to set up the active pixel area on each side of the cube, as well as bring in video feeds or a ticker that wraps around the cube," says Shor.

McCann also integrated five banks of nine Samsung 26-inch LCD displays, which were supplied by Fox. Each bank is integrated into the studio walls, which were made Chicago Scenic Studios and have multiple cutouts and adjustable mounts for the displays.

"The challenge was getting the LCDs to the fabricators in time," says Shor. "We chose an RF distribution backbone for the displays, so there was no need for routers and other equipment. Using RF technology made it a simplified system topology resulting in cost savings. In essence, we ran five wires for 45 monitors using a splitter at each bank."

The signal feeds for each LCD bank come over four channels off the Fox in-house router, modulated onto four open RF channels from the house MATV feed. The LCDs are mainly used for custom graphics in which a bank of nine screens creates a composite image, like a waving American flag. The studio also invested in Contemportary Research HD tuners that support all monitors.
The cages for the cube's four Christie Roadster S+20k projectors fit between the studio's existing grid and duct work. "The projectors are all mounted a bit off-axis with a Christie 0.73:1 fixed, short-throw lens," says Shor. "The setup ensures that the images are evenly centered, bright, and that the non-standard, 1:1 aspect ratio is preserved on all four sides."